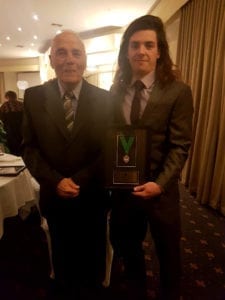 The former Maltese international passed away peacefully surrounded by family on Sunday 26 January 2020.

Tony Vella arrived in Australia from Malta in 1955, already an established footballer with the Maltese national team and Floriana FC.

At the tender age of just 16 years Chelsea Football Club in England had their eyes set on the young footballer in Malta and invited him to trial with them.  At the request of his beloved mother, Tony Vella refused the offer and stayed in Malta until 1955.

Tony Vella  joined Green Gully Ajax in 1971 as the senior coach and player.  In his first year at the Club the GG Ajax won its first ever championship.  Tony Vella was known at Green Gully as the football brain.  Tony was so advanced in his Football  knowledge for that time, he was quoted saying back in 1971.

In 2017 the Club named the Club’s Player of the year medal as the  Tony Vella medal in his honour.

On behalf of the Green Gully Board, Management, Players and all the staff we send our deepest condolences to the Vella family.